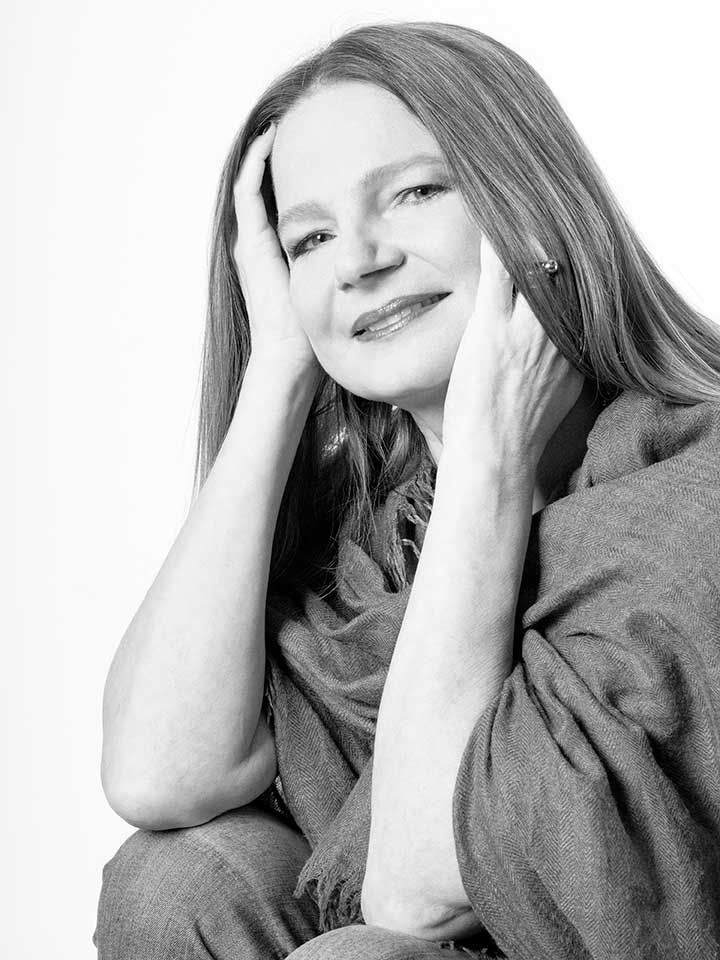 The daughter of Bogdan Tuszyński, sports reporter and historian, and  Halina Przedborska, journalist. Historian of theatre studies, Tuszyńska graduated from the State Academy of Dramatic Arts in Warsaw, she received her Ph.D. in the Humanities from the Art Institute at the Polish Academy of Sciences. Between 1987 and 1992, she was a lecturer at the Institute of Literary Research. Between 1996 and 1998, she lectured at the Center for Journalism in Warsaw, and since 2001 has taught courses in reportage and literary history at Warsaw University. She teaches classes at the Reportage Institute in Warsaw and the Literary and Artistic Study Centre at Jagiellonian University in Cracow.

Tuszyńska began her literary career writing about theatre in cultural periodicals, taking a particular interest in biography and literary reportage. She made her debut in 1990 with the biography of the fin de siècle Warsaw actress, Maria Wisnowska. The same year, she published the book Rosjanie w Warszawie (Russians in Warsaw) with the Polish émigré Institut Littéraire in Paris, describing the life and culture of the Polish capital under the Russian occupation. She collected materials for the biography of Isaac Bashevis Singer, the Nobel-prize winning Polish writer writing in Yiddish, in the United States, Israel, France, and in small Polish towns and villages. The book Singer. Pejzaże pamięci (Lost Landscapes: In Search of Isaac Bashevis Singer and the Jews of Poland), published in 1994, was reprinted many times in Poland, as well as published in translation in the US and France. Tuszyńska continued to pursue her interest in the vanishing world of the Polish Jews in the volume of Israeli reports Kilka portretów z Polską w tle. Reportaże izraelskie (Several Portraits with Poland in the Background: Reportage from Israel), also published in French translation.

Wyznania gorszycielki (Confessions of a Scandalous Woman) – memories of Irena Krzywicka, writer and feminist, Wiadomości literackie (Literary News) author, and a longtime friend of Tadeusz Boy-Żeleński – was the book Tuszyńska wrote in a tiny town near Paris where Krzywicka lived since the mid-1960s. Tuszyńska returned to Krzywicka’s story after her death in Długie życie gorszycielki (The long life of a Scandalous Woman).

Published in 2005 Rodzinna historia lęku (Family History of Fear), nominated in France for the Prix Medicis, is a dramatic and complex story about the fate of her Polish and Jewish ancestors. The author combined here her experience in biographical writing with personal non-fiction. The book was translated into French and English.

The story of a struggle with her husband’s cancer is the subject of Ćwiczenia z utraty (Exercises in Loss), a very intimate book, also published in French (Grasset, 2009) and Korean (2012).

Her most controversial book is Oskarżona: Wiera Gran (Vera Gran: The Accused ) – the story of a torch singer from the Warsaw ghetto, accused after the war of collaborating with the Germans. The book, based on conversations with Gran, supplemented by witness accounts, documents, archives and court testimony, has become a multidimensional treatise on the tragic choices, their moral consequences and the price to pay for salvation. Vera Gran was published in several countries: among others in France, Spain, Italy, the Netherlands, Greece, Israel, Macedonia and Slovenia.  In February 2013 it was released in the US (Knopf-Randomhouse-Bertelsmann Publishers) and in spring 2013 in Germany (Suhrkamp). An omnipresent character of this and other books by Tuszyńska is MEMORY, its painful ties, mysterious shapes, variable appearances.

Tyrmandowie. Romans amerykański  (Tyrmands. American Love Story) Tuszyńska’s next publication tells the story about the last period of Leopold Tyrmand’s life, the author of  Zły (The Man with White Eyes) alongside his American wife – Mary Ellen Fox. Almost a hundred of never before published letters of Tyrmand complete memories of his widow, showing a completely unseen face of the Vistula River playboy.

Narzeczona Schulza (The Fiancé of Bruno Schulz) released in 2015 is about Józefina Szelińska, the only woman whom Bruno Schulz, the author of The Street of Crocodiles proposed marriage. The story of their relationship and subsequently the war painted against Drohobych of the 1930s, is an episodic history of art, love and stigma. The French edition of La Fiancée de Bruno Schulz was nominated for the Prix Médicis and the Prix Femina 2015, while the Polish edition was nominated for the 2016 Gryfia Award. The book was translated into Macedonian and Ukrainian.

In addition to biography and reportage, Agata Tuszyńska is the author of seven collections of poetry, of which the latest, Nadzieja 2 (Hope 2), was released in the winter of 2010. Her poems are published in English, French, Hebrew, Spanish, and Russian translations.

In 2016 she was awarded the Canadian Jewish Literary Award in the category for Holocaust Literature for Family History of Fear.

Jamnikarium (Dachsunds Compendium), published in 2016,  is a complete encyclopedia about dachshunds and all those who sold their soul to them; the one and only such work in the author’s writing repertoire.

Bagaż osobisty. Po Marcu (2018, Personal Luggage. After March 68) is a polyphonic story about the generation of post-March emigrants who left Poland with a “travel document” stating that its holder is no longer a citizen of the country. It is the story of growing up, friendship, losing one’s homeland and starting a new life as an emigrant. Co-written with the participants of a History Meeting House seminar: Dorota Barczak-Perfikowska, Grażyna Latos, Elżbieta Strzałkowska, and Wiola Wejman.

Mama zawsze wraca (2020, Mom Always Comes Back) based on the memories of a Holocaust survivor, is a moving story of a girl hidden for many months in the Warsaw Ghetto. Beautifully illustrated by Iwona Chmielewska, the book is a testimony of the saving power of love and imagination.

Agata Tuszyńska has contributed to Zeszyty historyczne (Historical Notebooks), Zeszyty literackie (Literary Notebooks),Tygodnik Powszechny, Kresy, and Odra, and has also collaborated with the Paris émigré journal, Kultura (Culture). She is a member of the Association of Polish Writers, PEN-Club, and ZAIKS, and was a scholar at Columbia University, the Fulbright Foundation, MacDowell Colony, Ledig-Rowohlt, Kościuszko Foundation, Yad Vashem and at the American Jewish Archives. She was awarded the Xavier Pruszynski PEN-Club award for outstanding achievements in the field of documentary and fiction.  Tuszyńska was awarded the silver Gloria Artis Medal. She is an honorary citizen od Łęczyca and Kadzidło county.